AMBON, Indonesia — Activists in Indonesia have called on police to drop criminal charges against two indigenous men who took part in a confrontation against a company accused of illegally logging their ancestral forest.

Police in East Seram district, in the province of Maluku, have charged Stefanus Ahwalam and Khaleb Yamarua, of the Sabuai indigenous community, with causing damage to the property of plantation company CV Sumber Berkat Makmur.

They were among 26 indigenous people arrested by the police on Feb. 17 following a confrontation over the company’s logging activities in forested area deemed sacred by the community. The 24 others were released without charge on the complaint filed by the company, while Stefanus and Khaleb face a possible prosecution that could see them jailed for more than two and a half years.

“This can’t be tolerated. This is an environmental crime that must be resolved,” Usman Bugis, director of the environmental group Nanaku Maluku, told local media. “After damaging our customary forest, [the company] is now persecuting our people.”.

A map of the Maluku Islands province, in red, in eastern Indonesia. Image by TUBS via Wikimedia Commons (CC BY-SA 3.0).

The case is the latest in a long list of disputes between forest communities and the companies laying claim to the land. As with most of those other cases, the authorities appear to have prioritized the company’s grievances over those of the community, according to the Sabuai.

The community says it had previously consented to CV Sumber Berkat Makmur, which has a permit to cultivate nutmeg trees, operating in three other locations in the area, but not in the ancestral forest on Mount Ahwale, where the Sabuai bury their dead. On the morning of Feb. 17, a group of Sabuai men observed workers from the company loading up a truck with logs at the site in question. They demanded the workers stop and leave the area, but the workers refused.

A scuffle broke out, during which the indigenous men reportedly vandalized the heavy equipment on site and confiscated the keys. The company subsequently reported the incident to police, leading to the arrests. But the community says it plans to fight back, and has secured a March 12 court date for a pretrial motion to get the charges against Stefanus and Khaleb thrown out.

“How dare the company encroach into a location that’s prohibited by the community?” Niko Ahwalam, the Sabuai chief, said in a statement received by Mongabay on Feb. 22.

“Our action is solely to defend our rights on the forest and mountain that the company has grabbed. The forest is highly sacred. There lie the graves of our ancestors, and the site itself was the old village of the Sabuai people.” 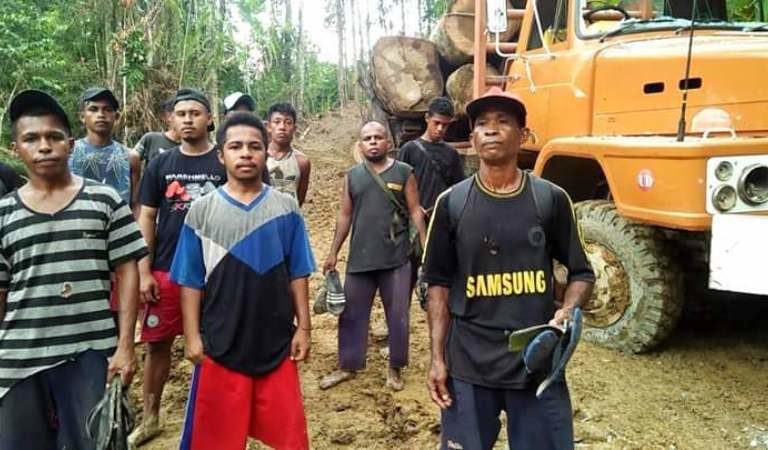 A key question in the case, and one obscured by the opaque permitting process in Indonesia, is whether the Sabuai ancestral forest falls within the concession awarded to CV Sumber Berkat Makmur in 2018. Mongabay has been unable to access the company’s plantation maps as of the time of this writing.

Imanuel Darusman, a director at CV Sumber Berkat Makmur, told reporters that the company had all the required permits to operate in the forest, including to clear trees ahead of planting and sell the timber. He said the company had also fulfilled all its promises to the Sabuai community as agreed on by both sides, including employing 70 community members. Imanuel said this was the first dispute to arise between the two sides since CV Sumber Berkat Makmur began operating there, and suggested other parties were to blame for inciting opposition to his company’s operations.

Here, as in much of Indonesia, the driving factor behind the dispute over indigenous land is the lack of formal title. Prior to a landmark 2013 court ruling, all indigenous lands across the country were considered state land, and were parceled out accordingly by the authorities for plantations, logging concessions, mines and more. The court ruling relinquished the state’s control over the land, but notably did not order it handed back to the respective communities. Instead, the government has had to do that on a case-by-case basis, and progress has been slow.

In the case of the Sabuai, the local government must first formally recognize that the Sabuai are an indigenous community, said Leny Patty, head of the Maluku provincial chapter of the Indigenous People’s Alliance of the Archipelago (AMAN). This recognition, issued in the form of a bylaw, can then be used by the Sabuai to apply to the central government for formal indigenous land rights and a title to their forest.

“If we have this indigenous rights bylaw, companies won’t be able to just come in and grab the rights of the Maluku people,” she said. “All of the forests in Maluku are customary forests.” 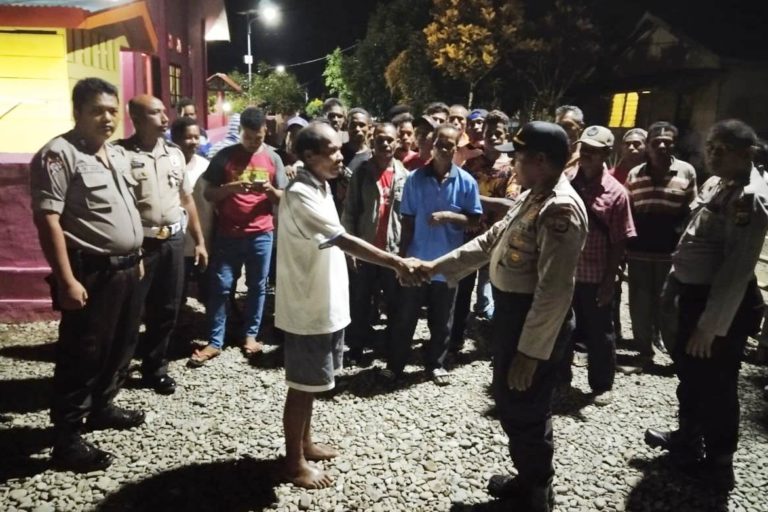 Police release most of the Sabuai men arrested after the Feb. 17 confrontation with workers from CV Sumber Berkat Makmur. Image courtesy of the East Seram Police.

With the case shrouded in uncertainty, pressure is growing for a freeze on CV Sumber Berkat Makmur’s operations to investigate the complaints by the Sabuai.

The Sabuai Student Alliance has filed a police report against the company, alleging illegal forest clearing without the requisite permit. It says the community was left out of the process of carrying out an environmental impact analysis for the plantation, and thus any permit issued to the company on the basis of that analysis cannot be valid.

Abraham Tulalessy, an environmental law expert at Pattimura University in Ambon, the provincial capital, has backed the calls for a police probe into the permit issue.

“The company must be investigated,” he said, adding the Sabuai community was the victim in the dispute.

The provincial legislature has also called on the company to temporarily halt its forest-clearing activity on the disputed land. It says the provincial forestry department should evaluate the company’s operations.

“The conclusion is that we must visit the site to cross-check the claims by NGOs and by officials from Sumber Berkat Makmur,” Richard Rahakbauw, a provincial legislator, said on Feb. 23.

This story was first reported by Mongabay’s Indonesia team and published here on our Indonesian site on Feb. 28, 2020.