EMail Us! Hello Guest! Not Registered or logged in?  Log in or   Register
Loading, please wait...
Browse: Home / Fijian PM accused Scott Morrison of being ‘very insulting and condescending’

Fiji's leader has hit out at his Australian counterpart, questioning their personal relationship following the Pacific Island Forum.

Fiji Prime Minister Frank Bainimarama has launched a scathing attack on Scott Morrison and his deputy prime minister over their attitude towards their Pacific island neighbours.

But the Australian prime minister insists his government still has a deep commitment to its regional neighbours after a tetchy week at the Pacific Island Forum which tried to turn the heat on Australia over climate change.

In an interview with Guardian Australia on Saturday, Mr Bainimarama accused Mr Morrison of being "very insulting and condescending" during a leaders retreat.READ MORE "I thought Morrison was a good friend of mine, apparently not," he said.

Asked if Mr Morrison's approach might cause some Pacific leaders to look to China, Mr Bainimarama said: "After what we went through with Morrison, nothing can be worse than him."

When combatting climate change, it’s good to have an ally like New Zealand in your corner. Together, we can save Tuvalu, the Pacific, and the world. Vinaka vakalevu for the passion you bring to this fight, @jacindaardern. 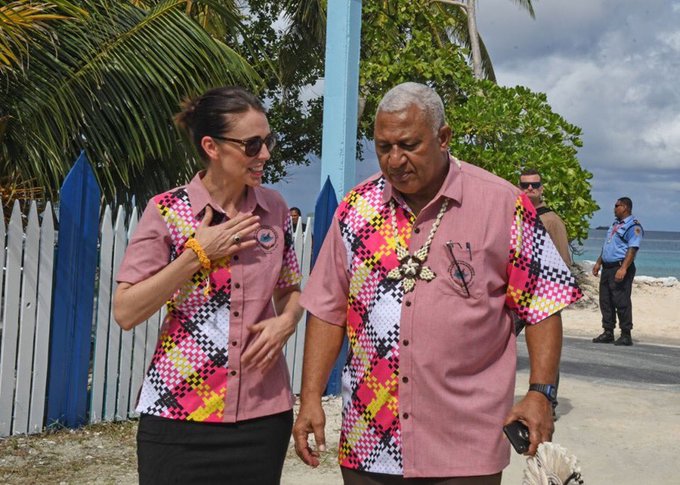 "It just adds insult to injury to have the deputy prime minister of the country then say if you lose your home through sea level rise you'll be fine because you'll be able to access some job opportunities in Australia."

Nationals Leader Michael McCormack, who was acting prime minister while Mr Morrison was attending the forum in Tuvalu this week, said on Friday he gets annoyed when Pacific countries point their finger at Australia and say it should be shutting down its resources sector.

"They'll continue to survive because many of their workers come here and pick our fruit, pick our fruit grown with hard Australian enterprise and endeavour and we welcome them and we always will," Mr McCormack is reported as saying.

Mr Bainimarama said the comments were insulting and disrespectful.

"But I get the impression that that's the sentiment brought across by the prime minister," he said.

Labor frontbencher Jason Clare also had a crack at Mr McCormack, saying it's hard to have credibility in this debate when emissions are going up and members of the government are cracking jokes.READ MORE

Back on home soil in Adelaide on Saturday, Mr Morrison said Australia has the deepest engagement and biggest commitment in the world to the Pacific,

"We're there for the difficult conversations, we're there for every type of conversation with our Pacific family, just like any family that comes around the table," he told reporters after addressing a South Australian Liberals conference.

"We will always be there and regardless of whatever issues we have to work through at the time."

Even so, Pacific island leaders are taking their call for action on climate change to the United Nations at a climate meeting in New York in September.

This week's forum ended with a statement calling on major economies to "rapidly implement their commitment to phase out inefficient fossil fuel subsidies".

Many of the forum members wanted to single out coal-fired power for its impact on the climate, but the language was rejected in the final document.SOURCE AAP - SBS