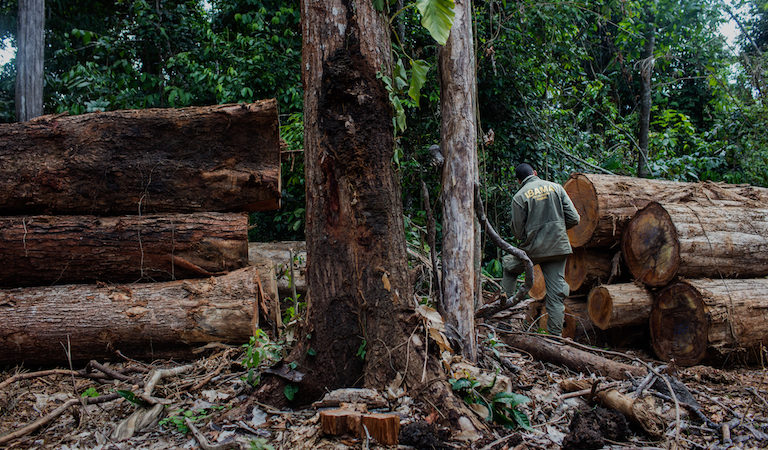 At the end of last year, Brazilian environmentalist Carlos Rittl sent out a perplexed tweet, accompanied by a graph, showing that forest degradation had almost doubled in the Brazilian Amazon in 2019 under the government of Jair Bolsonaro.

Forest degradation in the Amazon and elsewhere in Brazil often gets its start when loggers hack out rough tracks into the forest to cut and remove valuable timber. Even though the loggers leave most trees untouched, the forest loses almost as much biodiversity as it would if it were clear-cut. It also becomes more vulnerable to drought and forest fires. 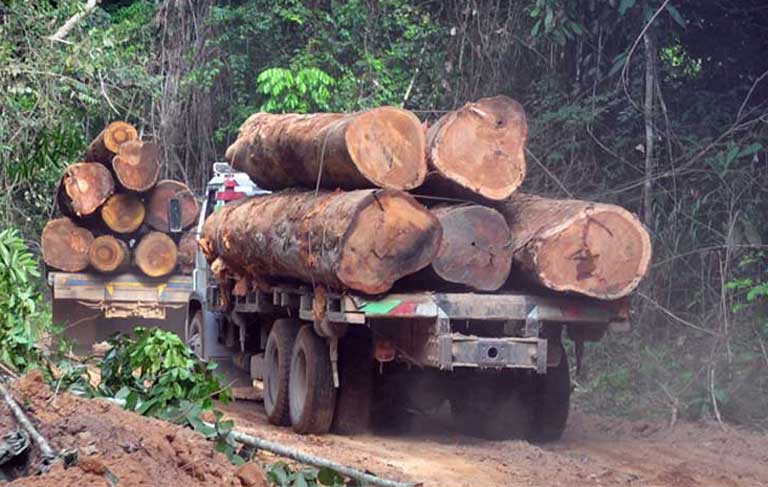 The environmentalist got the answer to his query last week when Reuters reported that during 2019 Brazil exported “thousands of cargoes of wood from an Amazonian port without authorization from the federal environment agency [IBAMA], increasing the risk that they originated from illegally deforested land.” An IBAMA employee told Reuters off-the-record that at one port in Pará, over half of the timber exported last year was not authorized.

According to a report published by the news website, Intercept Brasil, the IBAMA office in Pará tried to fix this embarrassing revelation, not by tightening its monitoring procedures, but by relaxing its regulations, turning what looked suspiciously like illegal imports into legal shipments abroad.

The report revealed that, in February, Walter Mendes Magalhães Junior, a retired military police officer from São Paulo state, who last October was appointed IBAMA Superintendent for Pará State (despite lacking experience in environmental regulation), had issued a retroactive export license for five containers of suspicious timber being held by customs authorities in the U.S., Belgium and Denmark.

The timber belonged to Tradelink, a British company, which boasts on its website of its “27 years of experience” and “its high quality product lines.” With Magalhães’ action, Tradelink salvaged cargoes together worth R$795,000 (US$168,258). In a document written at the time, Magalhães said that his help to Tradelink was not a one-off, as he would take similar “emergency action” to help “other companies that found themselves in a similar situation.”

When questioned by Intercept Brasil, Magalhães said that Tradelink had asked for export authorization, but IBAMA had not been able to deal with the request in a timely fashion. Magalhães explained that, with “very few employees,” IBAMA could not respond adequately to the “huge demands” it faced. As a result, the agency’s investigative oversight was summarily bypassed. 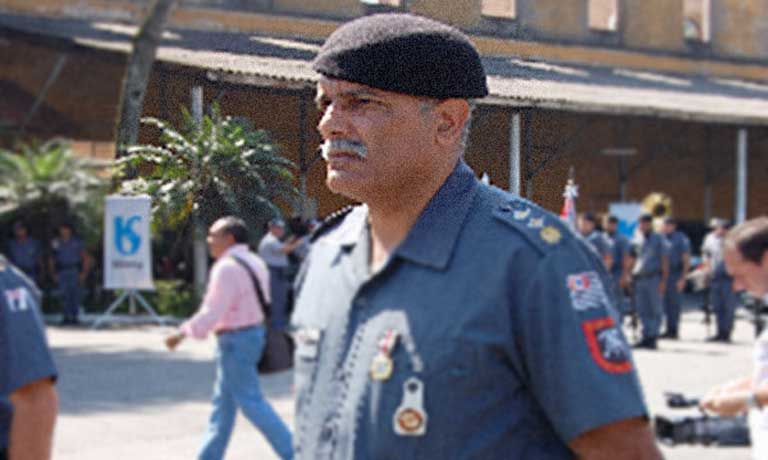 Legalizing deforestation with a pen stroke

These irregular exports of hard timber are not limited to Pará state. Alexandre Saraiva, head of the federal police for Amazonas state, sounded an alarm at a press conference after carrying out two operations to combat export fraud last September. He estimated that 90% of timber leaving Legal Amazônia was being illegally harvested. Legal Amazônia is vast — covering all, or parts, of nine Brazilian states.

After a public outcry surrounding events in Pará, environmentalists expected Eduardo Bim, IBAMA’s president under the Bolsonaro administration, to allocate more staff to monitor timber exports to ensure that such flouting of regulations didn’t occur in future. However, Bim reacted very differently, navigating a bureaucratic exit from the conundrum similar to the one adopted by Magalhães.

Bim took advantage of the lack of press scrutiny during Carnival at the end of February by quietly revoking a 2011 IBAMA policy requiring agency authorization before forest products could be given an export licence. Now authorization will only be required for species of trees threatened with extinction or in other special circumstances. In effect, he opened the spigot wide for large scale illegal timber shipments from the Brazilian Amazon. 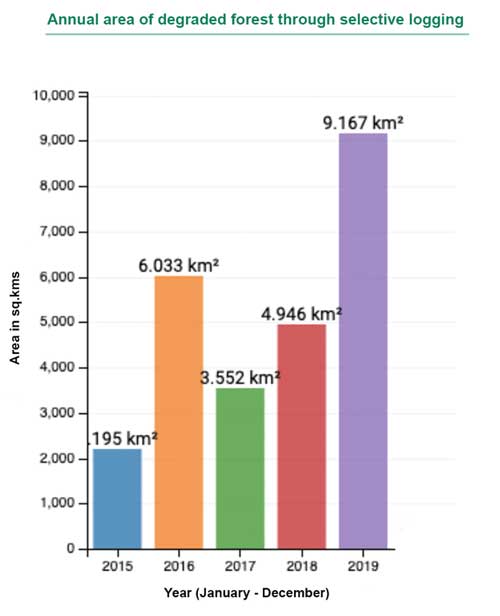 Annual area of degraded Brazilian Amazon forest through selective logging from 2015-2019. Data provided by INPE, image by Carlos Ritll and Infoclima on Twitter.

With the stroke of a pen, Bim ensured that all future unauthorized timber exports, previously regarded as illegal, would become legal. But, despite this bureaucratic sleight of hand, the likelihood remains just as high as ever that this now “legal” timber will have been illegally logged from indigenous territories or protected land, as nothing on the ground has changed. The rule revision horrified some IBAMA staff. According to Reuters, Bim overruled the opinion of five IBAMA experts.

According to Intercept Brasil, Bim made his decision in response to demands from Brazil’s timber industry. The Centre of Pará Industries, a lobbying group, celebrated Bim’s action in a press release saying that the measure “put in order exports of legal and authorized timber from Brazil and, particularly, Amazônia.”

But Bim’s actions made many IBAMA staff very unhappy. One employee, who spoke to Intercept Brasil off-the-record, said that personnel burst out laughing when Bim told them they will have access “a posteriori” (that is, after the event) to export data provided by the companies. “What use will it be then?” lamented the employee.

What some IBAMA staff and environmentalists fear is that this regulatory manipulation will effectively “launder” questionable timber, not only protecting illegal loggers at the wood’s point of origin, but also sparing the nation of Brazil from deforestation accusations. At the same time, it will shield countries and major retailers receiving the valued timber at the far end of the supply chain in the EU, UK, US and elsewhere, preventing their green reputations from being linked to, and tarnished by, illegal Amazon deforestation.

Bim was the first major appointment announced in December 2018 by Ricardo Salles, the soon-to-be environment minister under President Jair Bolsonaro. Salles has never hidden his siding with the timber industry, even when illegal loggers attacked IBAMA staff. Following the minister’s guidelines, Bim has made it difficult for IBAMA staff to talk to the press. After the recent reports by Reuters and Intercept Brasil, Bim reacted by repeating his demand that staff refer all press requests to IBAMA’s Department of Communications. 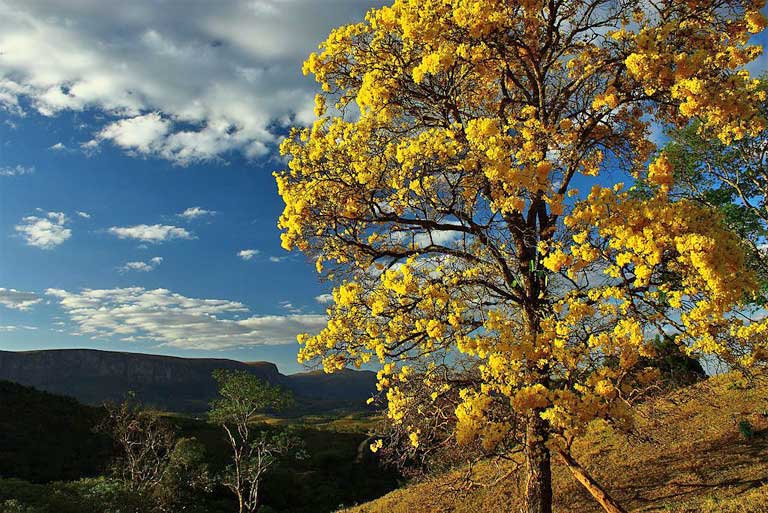 Ipê (Handroanthus albus), one of the most valuable tree species in the world, and a popular target of illegal loggers. Image by Hermínio Lacerda / Banco de Imagens do IBAMA.

The lax new regulations will allow illegal logging crime syndicates to operate with a free hand in the Amazon, not even having to maintain a veneer of legality, say human rights activists who fear that violence will escalate as timber cutters invade the lands held by indigenous and traditional communities.

At the beginning of 2019, Amazon activists Osvalinda and Daniel Pereira, whose story has been reported by Mongabay, had to leave their plot of land in the Areia Settlement in the west of Pará due to increased death threats from illegal loggers. “The number of trucks transporting timber increased and with it the pressure on us,” said Osvalinda.

The couple lived at the center of an illegal timber hotspot. In 2017 alone, loggers using the road passing through the Areia Settlement illegally extracted an estimated 23,000 cubic meters (812,237 cubic feet) of ipê, an extremely valuable hardwood, from the Riozinho do Anfrísio Extractivist Reserve, according to the Brazilian NGO, Socioenvironmental Institute (ISA). The shipments were worth R$208 million (US$168,258).

Ipê is among the most valuable tree species in the world. The high value of Ipê wood —made into flooring or decking for upscale European or US homes — can sell for up to $2,500 per cubic meter at Brazilian export terminals. Loggers must penetrate deep into rainforests to harvest the trees, creating roads later used by other invaders.

The Human Rights Watch report, Rainforest Mafias – How Violence and Impunity Fuel Deforestation in Brazil’s Amazon, analyzed 28 assassinations and 40 cases of death threats in the region, and offered strong evidence that criminals see activists and resistors as an obstacle to illegal logging. One reason for the authorities’ failure to stem the violence, the Human Rights Watch concluded, is the recent weakening of environmental crime monitoring. 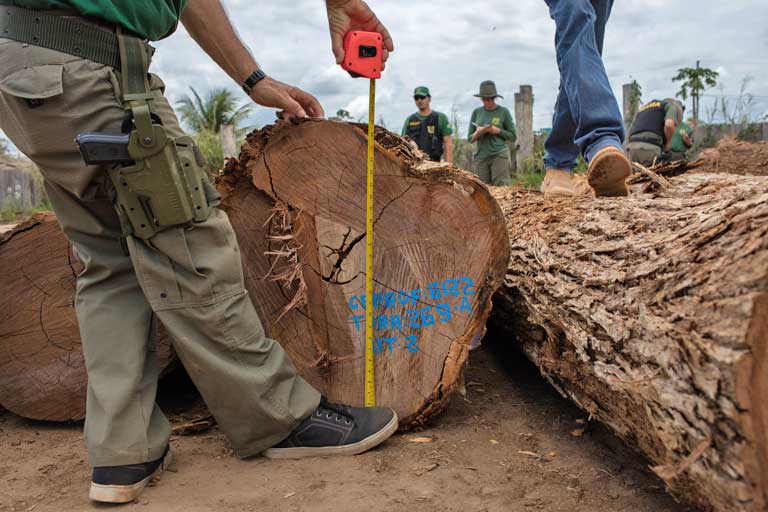 IBAMA officers conduct a timber inspection in the years before Bolsonaro took office. They measure the volume of timber and confirm botanical identification at a sawmill suspected of receiving illegal Ipê logs in Pará state. Experts say that fraud is likely occurring along the entire Brazilian timber supply chain. Image © Marizilda Cruppe / Greenpeace.

One indication of this weakening is the decline in penalties imposed by IBAMA for such crimes. In 2019, the number of environmental fines fell by 34% to 9,745, the lowest in 24 years. The value of the fines fell even more heavily, by 43%, to R$2.9 billion (US$614 million). This is the lowest level of fines since 1995, when Brazil was setting records for Amazon deforestation. If the past is any indication, those fines will go mostly uncollected, and eventually may be forgiven altogether.

Meanwhile, over the past decade, more than 300 people, many of them leading activists and leaders, were assassinated as the direct result of land and natural resource conflicts in the Brazilian Amazon, according to the Catholic Church’s Pastoral Land Commission (CPT).

People living in the forest today, in the midst of this brutal conflict and often far from law enforcement, now worry that the Bolsonaro administration’s weakening of regulations governing timber exports will leave them at the mercy of emboldened timber harvesting crime syndicates.

Osvalinda fears that human tragedy will come hot on the heels of 2019’s record levels of forest degradation. “With so many indications of growing impunity,” she says, “I can only think in great sadness that the next record to be broken will be the number of deaths in the countryside.”

by Thais Borges and Sue Branford on 11 March 2020 Source: https://news.mongabay.com/